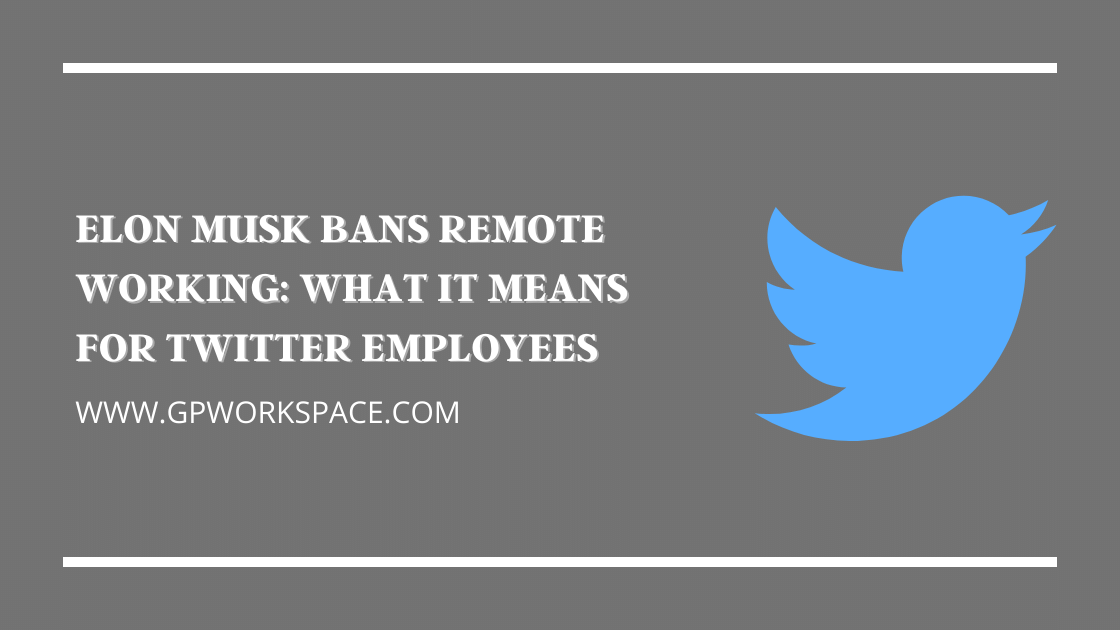 Elon Musk announced that remote working would no longer be allowed for Twitter employees. This decision was met with mixed reactions, with some people praising Musk for his dedication to his workplace and others criticizing him for his lack of understanding of the modern workforce.

So why did Musk make this decision? One reason may be that he feels that remote working is less productive than working in an office. Studies have shown that people who work from home are more likely to take breaks and have difficulty focusing on their work. Additionally, remote workers often miss important social cues, leading to miscommunication and conflict.

Musk, known for his perfectionism and high standards, likely felt remote working was simply not up to par. Another reason for the ban is company culture. Working in an office allows for more casual bonding and collaboration opportunities, which can help create a strong company culture. It is much harder to develop these relationships in a remote environment. For Musk, who values close-knit teams, this may have been another motivating factor behind his decision.

Whatever the reasons behind Musk's decision, it is clear that he feels strongly about the importance of having employees work in the office. Only time will tell if this decision will pay off for him in the long run.

In a recent interaction on Twitter, Elon Musk stated that remote workers should spend at least 40 hours per week in the office. This sentiment was met with mixed reactions, with some agreeing and others expressing concern. However, a few key reasons why spending more time in the office can benefit remote workers.

First, it allows employees to socialize and build relationships with their colleagues. Second, it allows for greater collaboration and communication. And finally, it gives workers a chance to take advantage of on-site amenities such as coffee shops and gyms. While there are some advantages to working from home, it's important to consider the benefits of working in the office.

Last week, Elon Musk revealed that Twitter employees would be given 60 days to relocate close to the Twitter office. The move is intended to help improve communication and collaboration within the company. While some employees may be reluctant to move, it is important to remember that relocating for a job is not unusual.

Many people relocate every year for work. And while uprooting oneself can be disruptive, it can lead to new opportunities and experiences. For those considering relocating for work, it is important to weigh the pros and cons carefully. But for now, Twitter employees will have to start packing their bags.

Over the past year, the COVID-19 pandemic has forced many businesses to reevaluate their office policies. For some companies, this has meant a shift to remote work, and it appears that Twitter is one of them. Earlier this week, Twitter CEO Jack Dorsey announced that employees who can do their jobs remotely could continue to do so indefinitely. This news was met with praise from employees, but it was also met with some criticism. One of the most notable critics is Elon Musk, who took to Twitter to voice his opinion on the matter.

In a series of tweets, Musk said that he believes exceptional employees should be allowed to continue working remotely. He also said that remote work is not an option for everyone, and it can be difficult for some people to stay motivated without being in an office setting. However, he ultimately concluded that remote work is a good option for those who can do it well. It is clear that Musk feels strongly about this issue, and it will be interesting to see how Dorsey and other Twitter executives respond to his comments.

The Same Thing Happened to Tesla and SpaceX

Recently, Tesla and SpaceX have announced that they are discontinuing remote work and requiring all employees to return to the office. This is a controversial decision, and many workers are unhappy with the change. However, there are several reasons why Elon Musk made this choice.

First, he believes creativity and innovation happen best when people are together in the same room. Second, he feels that remote work can be isolating and lead to burnout. Finally, he wants to create a more collaborative culture at Tesla and SpaceX.

While there are some drawbacks to this decision, it is clear that Musk has thought carefully about what is best for his company. Only time will tell whether this new strategy will be successful.

Is It The End of Remote Working?

Tesla and SpaceX CEO Elon Musk recently announced that he is banning remote work immediately. This has led many to question whether this is the end of remote working. However, it is important to note that Tesla and SpaceX do not represent the entire workforce.

Tech companies do not employ most remote workers. Rather, they are employed in various industries, including healthcare, customer service, and education. Moreover, many remote workers are self-employed. This means that they have the flexibility to work from anywhere, regardless of their employer's location. Therefore, it is unlikely that Elon Musk's decision will significantly impact the future of remote working.

Be sure to follow GP Workspace for work tips and the latest coworking space deals. We provide all the latest tips and tricks to help you get ahead at work. From time management strategies to ways to increase your focus, we've got you covered. Visit our website or book a coworking space today.